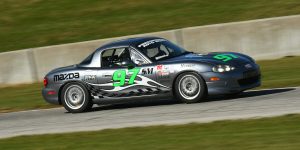 SCCA.com - October 14, 2020 at 5:57 pm - Just a few weeks ago, the SCCA and IMSA formalized a relationship that aims to connect motorsports enthusiasts. But that relationship has been a two-way street for many, many years.

Multiple SCCA drivers have advanced into IMSA for their professional sports car racing careers – and while many “graduate” to a permanent ride in pro racing and beyond, just as many still stick their toes into an SCCA road race in conjunction with their IMSA rides.

Count Brian Henderson among the IMSA drivers who fits the “SCCA Got Me Started” campaign that was part of the IMSA/SCCA collaboration.

There’s no secret why a driver like Henderson, a recent graduate of UNC Charlotte, continues to come back to SCCA events like the Runoffs. First is the opportunity to race, which in a season like 2020 has been a challenge at every level. Henderson’s Pilot Challenge season was shortened for reasons beyond his control, but it has given him the opportunity to try out some additional opportunities like IMSA’s Porsche GT3 Cup Challenge USA by Yokohama championship at his home track of VIRginia International Raceway (VIR).

“I started racing with SCCA in 2014,” Henderson said. “This was such a great starting point for me because there has always been such close competition. As I continued to move forward in my career I kept finding myself coming back to SCCA not only for the competition, but for the experience.”

The second is the chance to drive his No. 97 BDL Motorsports/Performance Auto Works Mazda Miata in the same Spec Miata championship race with his father, David Henderson.

“Racing Spec Miata has become something my father and I have grown to love together, and that has been one of the most rewarding experiences of all,” Henderson said. “Over the years I have gained some close friendships and really look forward to spending as much time in any race car as possible. As we’ve seen this year, anything can happen, and I’m very grateful to be able to race anything.”

The collective experience has certainly helped. In his lone Runoffs appearance a season ago, Henderson finished fourth in Spec Miata at VIR. With any luck, he’ll continue to add more to his “SCCA Got Me Started” story.